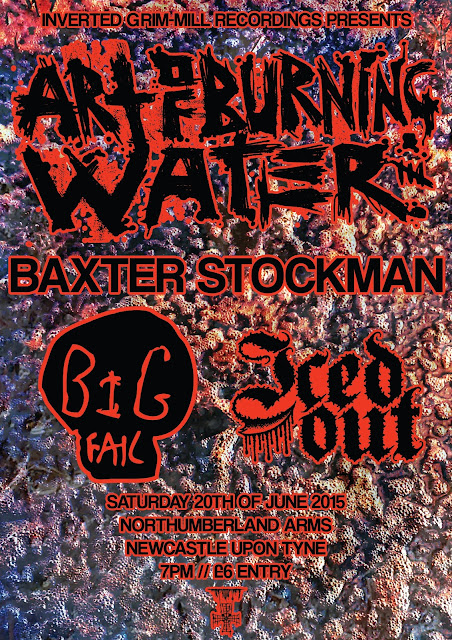 Durham hardcore for fans of Entombed, Trap Them, etc.

This one got a write up in Narc magazine too: 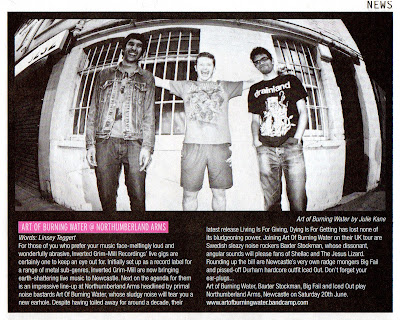 Posted by Dr Jonas Christ at 16:06 No comments: 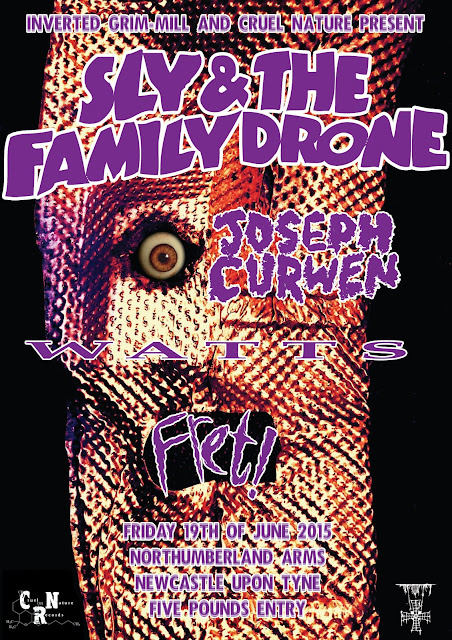 Using only drums and processed cassettes, and incorporating many elements of avant-garde music and sound art in their realisation, Sly & The Family Drone are a primal orchestra of drum rhythms, radiophonic oscillator noise and electronically-abstracted vocals. They forge hypnotic, textural workouts in the vein of Black Dice, Shit & Shine and Crash Worship.

Sly's reductionist take on music is literal; they split their drum kit to its singular base units, passing individual drums to the audience who maintain the beat while they free themselves for more noise and freestyle mayhem, ultimately eliminating any boundaries between spectator and performer. This egalitarian approach propels audience and band together into a shamanistic setting of catharsis and anarchic celebration, By the end of the set their drums and equipment are scattered; the remnants of their music lying bare across the floor.

There is no place for guitars within this band.

"Their live show are becoming legendary. Things usually get broken. There will be more than likely blood. A must see live experience. No gig by Sly & The Family Drone is ever the same." Club Velocity 2011

Organic atmospheric ambient noise by him from Dolmen Dweller, Colugo, Lump Hammer, Blind Spite, Plague Rider and so on...

Narc magazine wrote a few words about the show too:

Posted by Dr Jonas Christ at 03:20 No comments: 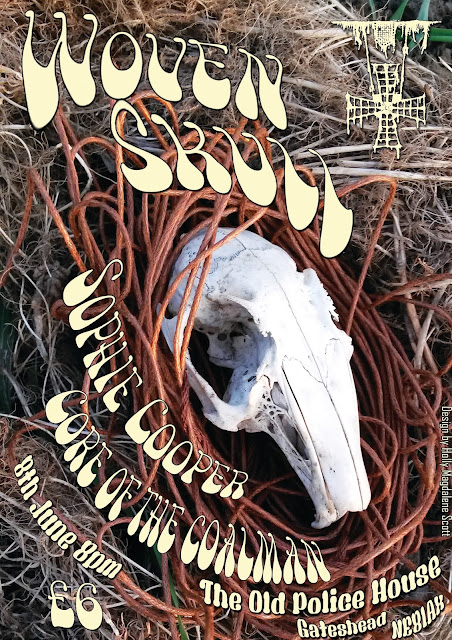 In 2008, Woven Skull first began playing together in a house owned by two of the members and located at the foot of Sheemore (a hill where two factions of fairies clash in an annual battle) in the empty sparse countryside of northwest Ireland. These atmospheric surroundings helped to forge their music which has been described as "minimal, repetitive, distorted, ugly and beautiful in one". The trio spent several years experimenting with combinations of instrumentation, household objects, kitchen utensils, seashells, footsteps, chimes, recordings of cats purring and frogs mating while developing a sound that after a recent set was described as "a Turkish Velvet Underground".

Within the group, song writing is split equally between Aonghus on densely propulsive guitar and Natalia on distorted mandola. The riffs Natalia composes are seeped deep in the Ukrainian lullabies and superstitions that surrounded her as a child and those that Aonghus writes stem from his past musical projects that span from harsh noise to improv. These are glued together by the endless cyclical rhythms created by Willie and inspired by the sounds he encounters as he walks the boggy lanes that surround his home: from syncopated cattle calls to the beating wings of bats in the night to the creaking of trees as they push against each other in the wind.

Woven Skull have recorded in dark haunted woods, beside bottomless lakes, and in attics of abandoned houses. Their upcoming LP, "Lair of the Glowing Bantling" is their first studio album and captures a sound that's more in line with their live performance than past releases which have been a mix of lo-fi practice tapes, outdoor recordings and segments from collaborative sets.

Sophie Cooper is a West Yorkshire based musician influenced by psychedelic pop, weird noise and drone, whose main interest is in experimenting with conventional song writing. Cooper's music is written to reflect her life and more often that not is inspired by the people around her. The songs have a dreamlike quality, with sounds and vocals drifting in and out of clarity. Cooper has been making music since her early teens and has been in a string of acts including Cooper Jones and Leopard Leg.

CORE OF THE COALMAN

Hailing from the Czech Republic, Jorge Boehringer's performances as Core of the Coalman normally include conventional instruments such as viola and harmonica, as well as feedback-driven yodel triggers, descending tympanic pressures implying sexual interface, and extended upwardly-mobile Carnasitic arrays, with ornaments. Core of the Coalman has been featured on all kinds of concert programs from power electronics and noise performances to small gallery events and on major art festival performances such as Impakt Festival (presented by Kraak) and Colour Out of Space (presented by Chocolate Monk).

Poster by Holly Magdalene Scott
Posted by Dr Jonas Christ at 14:54 No comments: 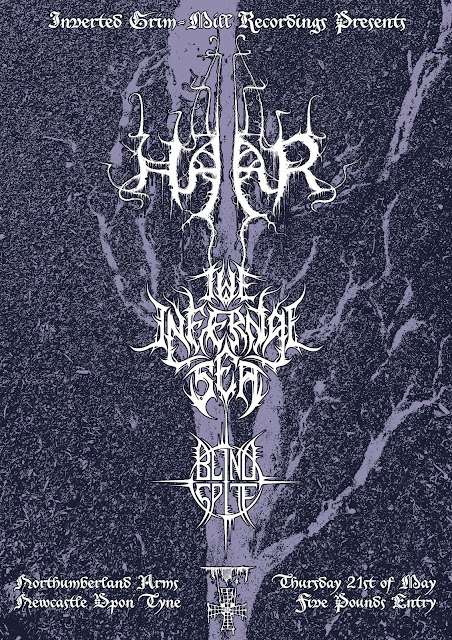 Haar from Edinburgh was formed in 2008 with the ambition to create challenging and idiosyncratic black metal. Their sound is defined by a generous measure of dissonance, a progressive approach to songwriting and a palette of sounds that includes death and doom metal influences. Lyrical subject matter is typically rooted in a study of ontology and human nature.

From the fens of Eastern England, The Infernal Sea's style is rooted in the traditional black metal sound. Not afraid to experiment and push the boundaries, they bring an eclectic mix of influences to their sound. Their intense live performances have carved them into something unique and terrifying.

Blind Spite fuse the atmospherics and vitriol of black metal with the brutality of death metal to create an uncompromising and expansive take on the human condition and the vast uncaring universe we inhabit.

Posted by Dr Jonas Christ at 13:52 No comments: 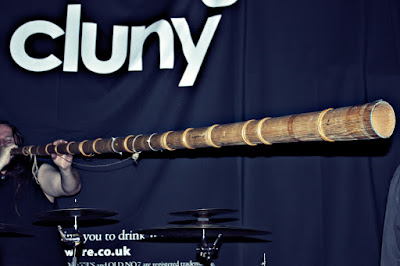 Thanks to all who attended the show at Cluny 2 featuring Negura Bunget, Northern Plague, Agamendon and Grimegod. Cheers to Gabriel Mafa for being organised and easy to deal with in the run up to the show, Omega Warfare Records for sharing the promoters duties, and Katie Metcalfe for the photographs which you can see here.

Posted by Dr Jonas Christ at 04:01 No comments:

Just a quick thank you to all who attended the MOSS, BONG and NEOLITHIC show at The Cluny on Friday the 8th of May. Here are some photos and links to full galleries of each band from GJB Performance Photography: 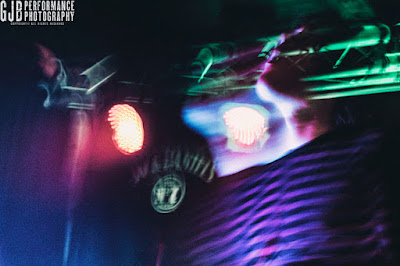 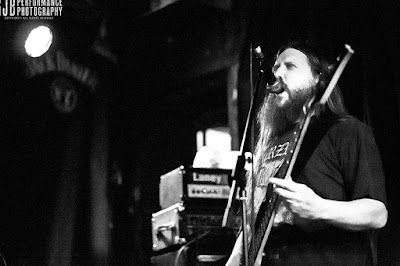 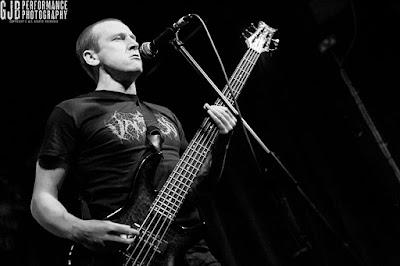 Thanks once again to all the performers.

Posted by Dr Jonas Christ at 03:57 No comments: 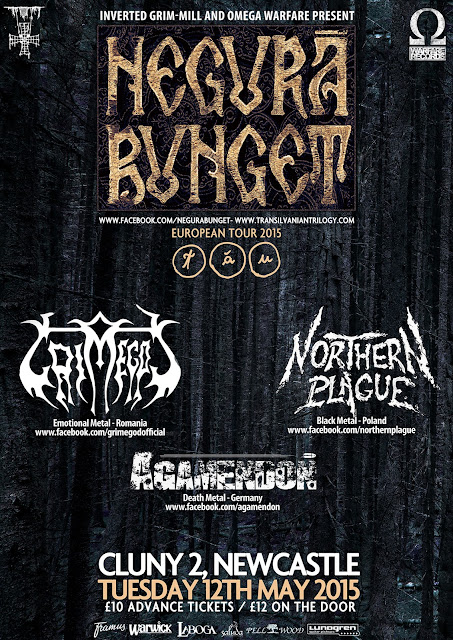 Negura Bunget is a black metal band from Timisoara, Romania whose atmospheric sound incorporates elements of progressive metal and folk. To this date, Negura Bunget have released 6 full length albums and 4 EPs.

On October 13th 2014, Negura Bunget finalised the recordings, mixing and mastering for the upcoming album TAU. As the first part of a musical and visual trilogy about their Transylvanian homeland, TAU focuses on the natural landscapes, exploring marvelous places, with their myths, legends and traditions, opening a window to the past of these legendary lands. The album is scheduled for release in early 2015, on Prophecy Productions.

Posted by Dr Jonas Christ at 12:37 No comments: